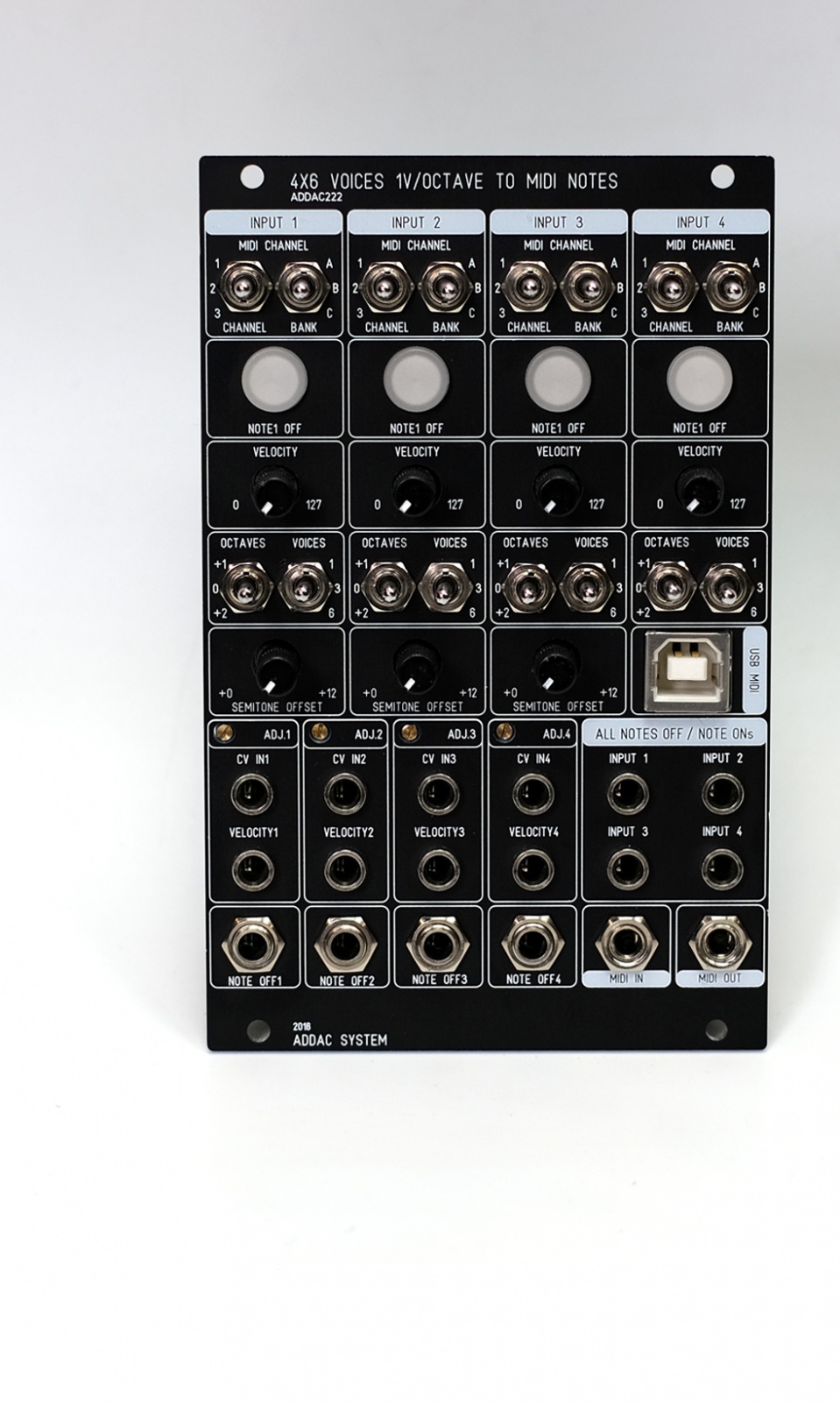 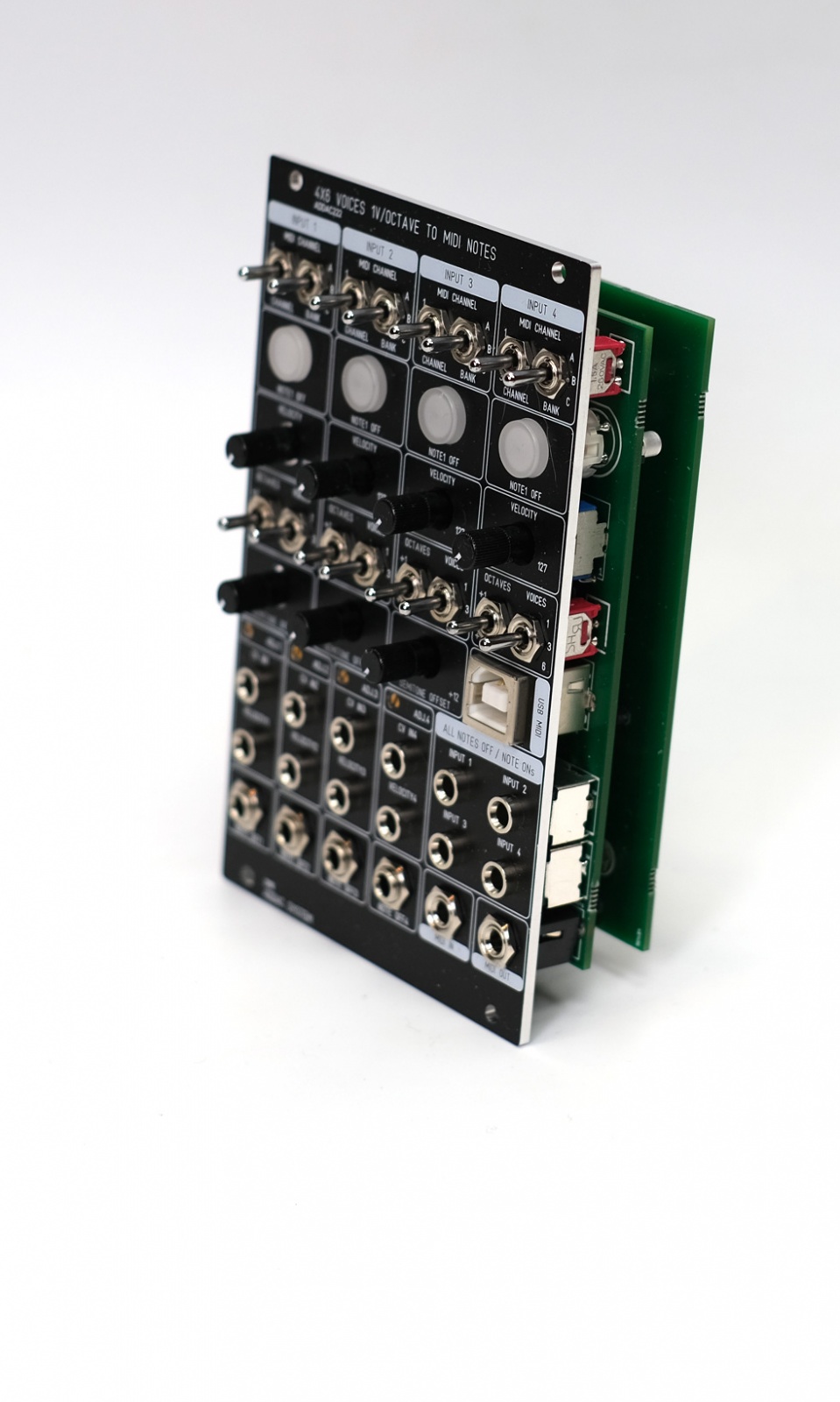 Most recent from the ADDAC MIDI Series, the 222 converts 4 CV inputs to four distinct polyphonic MIDI NOTES streams, with up to 6 note voices per input. This allows the user to send MIDI notes to external midi devices straight from your modular: just plug it into your classic synth or your favourite virtual instruments. Combined with the ADDAC221 you can fully control any external MIDI device.

Features:
. The user can send MIDI notes to 9 different MIDI channels (3 BANKS with 3 MIDI CHANNELS each). So, any of the 4 cv inputs may independently send its data to one of these 9 MIDI channels.
. NOTE OFFs may be sent by pressing the NOTExOFF button or as soon as a trigger is received in the NOTE OFFx cv input.
. A trigger sent to the ALL NOTES OFF cv input (1-4) will remove all the notes at the respective MIDI INPUT.
. The OCTAVES switch (one per INPUT) transposes the notes from +1 to +2 octaves, a rate that can be extended by one more octave using the C1-C2 OFFSET knob.
. The ADJ.x trimmer calibrates the amount of voltage per octave to compensate a possible deviation in the CV IN received signal.
. USB MIDI received data will be routed to the MIDI OUT jack.
. In turn, MIDI data externally sent to the MIDI IN jack will be routed both to the MIDI OUT jack and the USB MIDI port.

In case you're wondering: Sure! We can get you a custom coloured front panel for the ADDAC222.
It has an additional cost and takes 4 to 6 weeks to be ready.

At the moment the ADDAC222 standard panel colour is Black.

A custom colour panel can be done in either Red, Green, Blue, White, Silver Gray, Yellowed Silver, and Dark or Light Bronze.

The note off function puzzles me a bit anyway. Am i wrong if I see it as a sort of « MIDI gate effect » allowing to cut the MIDI flow with a sequence of gates?

When you press a key on a MIDI keyboard, there's a Note On message that includes the note (ex. C2, E5...) and the velocity or how hard you pressed the key. When you release the keyboard key there's a second message: Note Off, that simply cancels the previous note.

This Note On/Off combination tells the synth to play this or that note and for how long.

The module detects incoming cv and translates it, using the 1v/oct standard, to midi notes within a 5 octave range. This can be done in a free flow mode so that it sends a new note every time it detects a cv change on or it can work more like a sample and hold function, triggering new notes only when it receives a Note On in this case coming from an external trigger input.

For ex. In a sequencer setup you can use a gate delay to cancel the note being played, so that the sequencer cv out would trigger a new note at every step and the sequencer gate can be sent to a gate delay that would then trigger the Note Off, with a short delay time you can get staccato type playing.

When you set one channel on "3 voices", does it agregate three notes coming into the input to make a triad, firing at the last note for example? I don’t fully understand the voices allocation when the channel is set to more than one note…

The voices operate in an old school synth fashion, in wrap-around mode.

For ex. Imagine you're sending a cv signal from a sequencer; every time the sequencer goes to a new step you'll hear a new note being played. If you set it to 1 voice, then every time a new note comes in from the sequencer the MIDI output plays the new note and cancels the previous note. In 3 voice mode the module will output the first note on the first cv change, a second note on the second cv change, a third note on the third cv change. By now all 3 notes will be heard. Once the fourth cv change comes in the module will cancel the first note and change it to the fourth cv input value, then the fifth cv change will replace the second note and so on and on...

This will be the same method as for 6 voices but the wrap-around will happen after 6 cv changes allowing 6 notes to be heard at the same time.

The 3 and 6 voices modes will only work with polyphonic MIDI devices.

Here's the procedure for updating your ADDAC222 Firmware

Take your module out from the frame but keep it connected to your modular and keep power ON.

Also plug the usb cable to your computer and the ADDAC222 front panel USB port.

Then look between the 2 pcbs of the module and there’s a smaller board in between, at the bottom of that small board you can find a small push button, use some plastic tool (metal may short some pins when reaching in) to reach in and press the button once.

Now hit upload on the teensy loader app and you're all done.

B_7 Changes Log:
.Corrected an issue that broke the forwarding of messages from the USB to MIDI OUT when the Jumper was installed!
.Other minor note detection improvements!

B_3 changes log:
.Corrected a bug regarding the new 3rd Mode for notes output.

B_0 changes log:
.Added a 3rd Mode for notes output: Gate Follower with Sustain:
. Notes On/Off will follow the respective channel Gate input, When the Gate is On the note will become active and inactive when Gate drops to Off.
. Sustain will allow to hold the notes played ignoring the Gate off signal

.Also corrected some issues with holding notes when changing midi channels and number of voices.

A_6 changes log:
.Corrected issue with some "ghost" notes inadvertently being triggered.