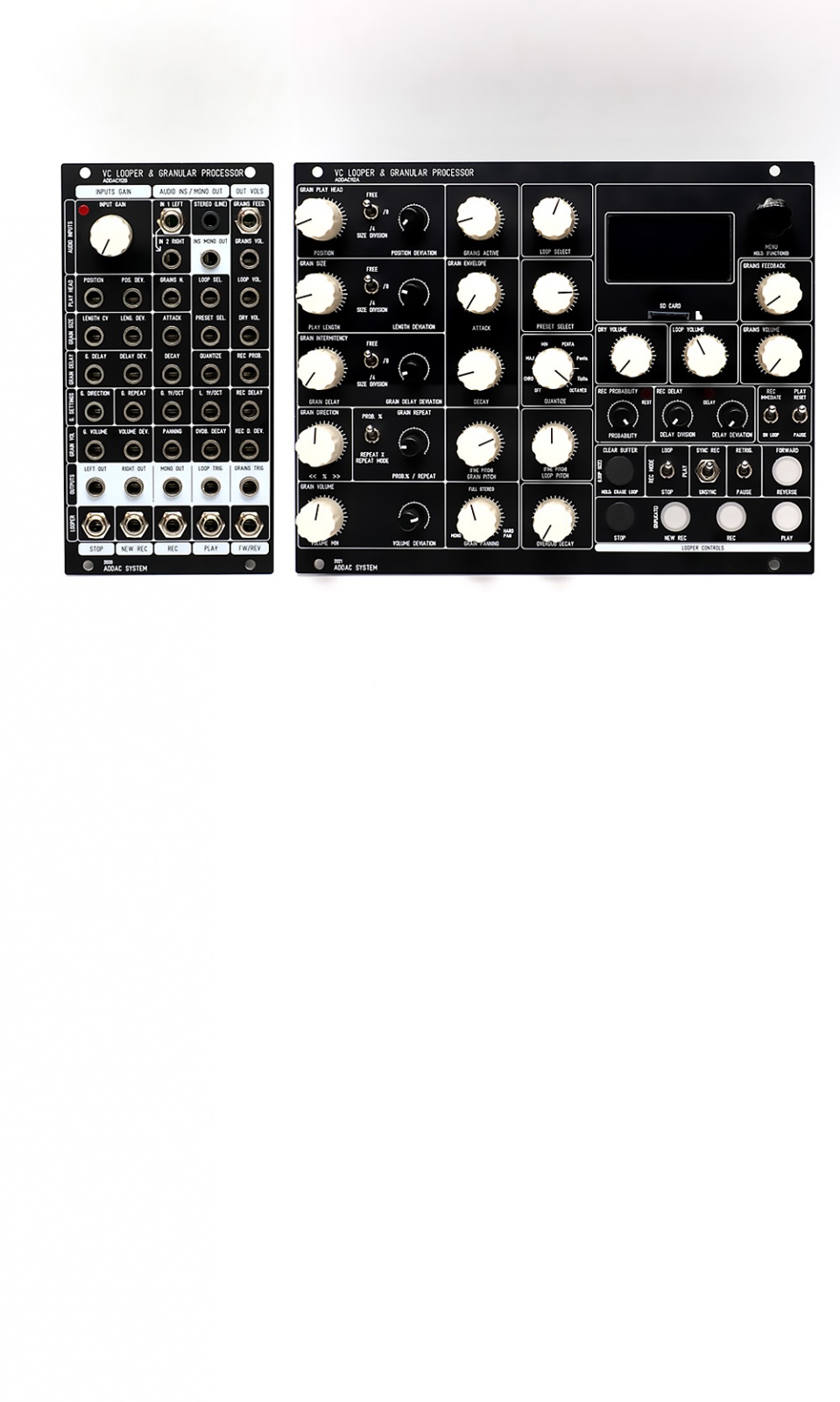 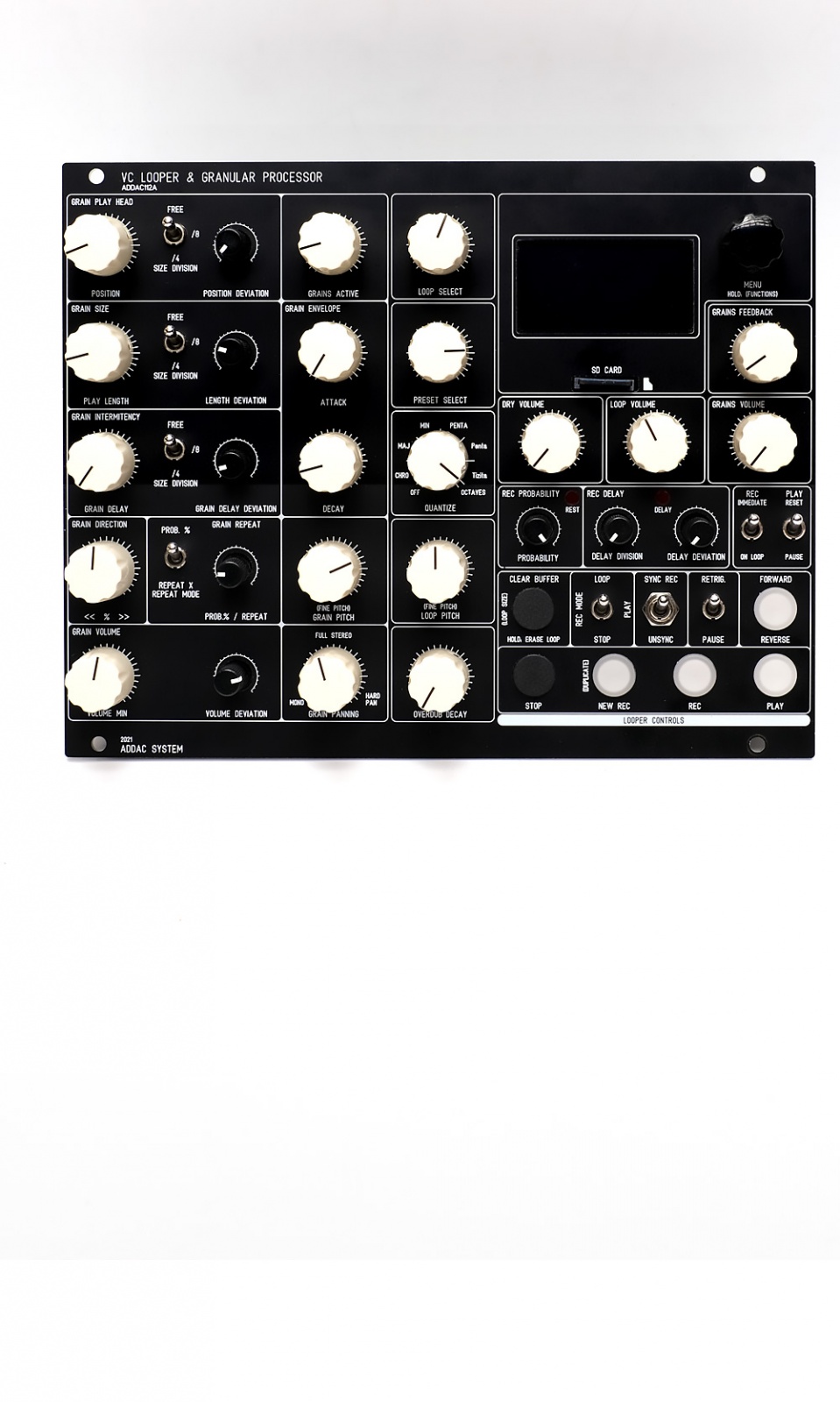 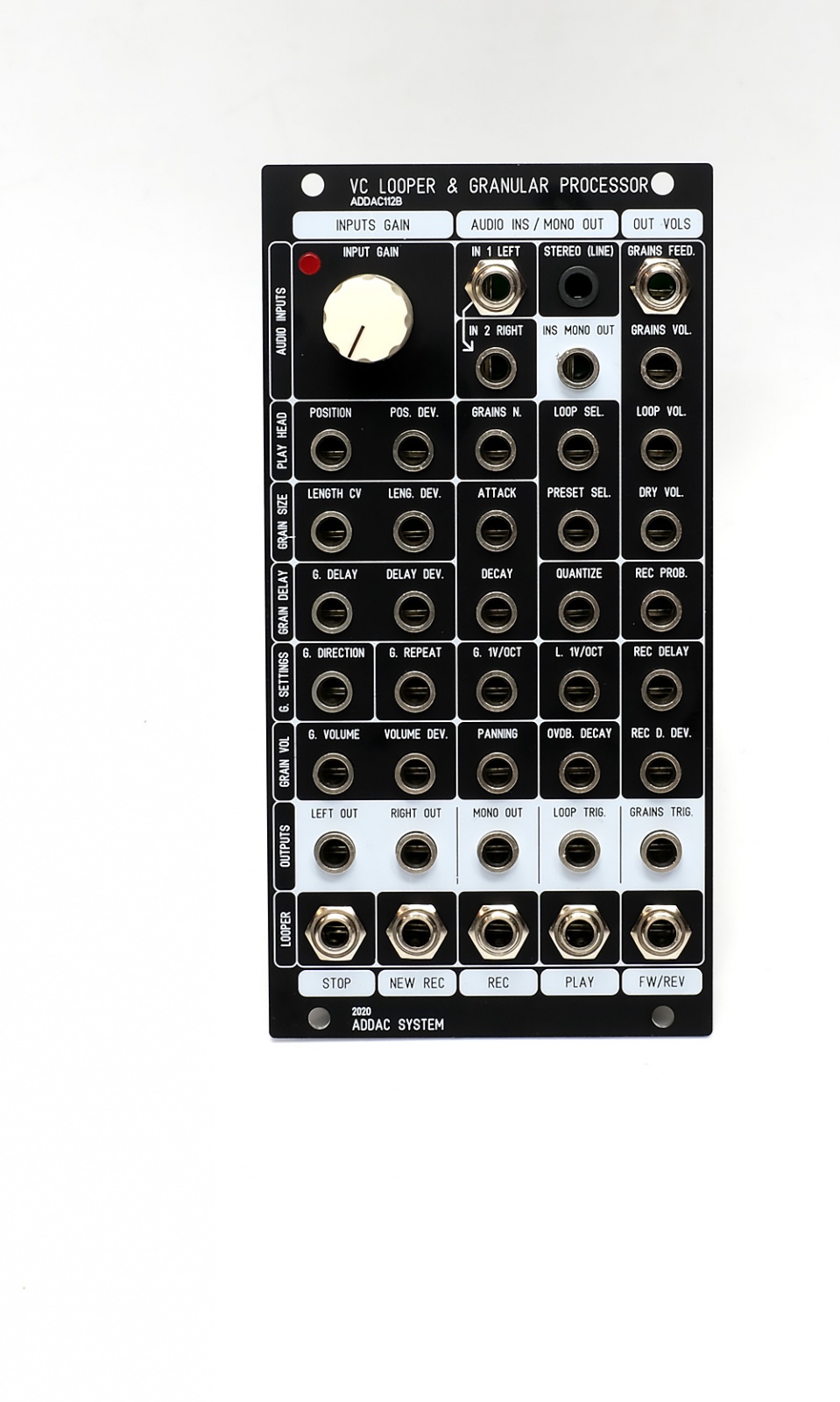 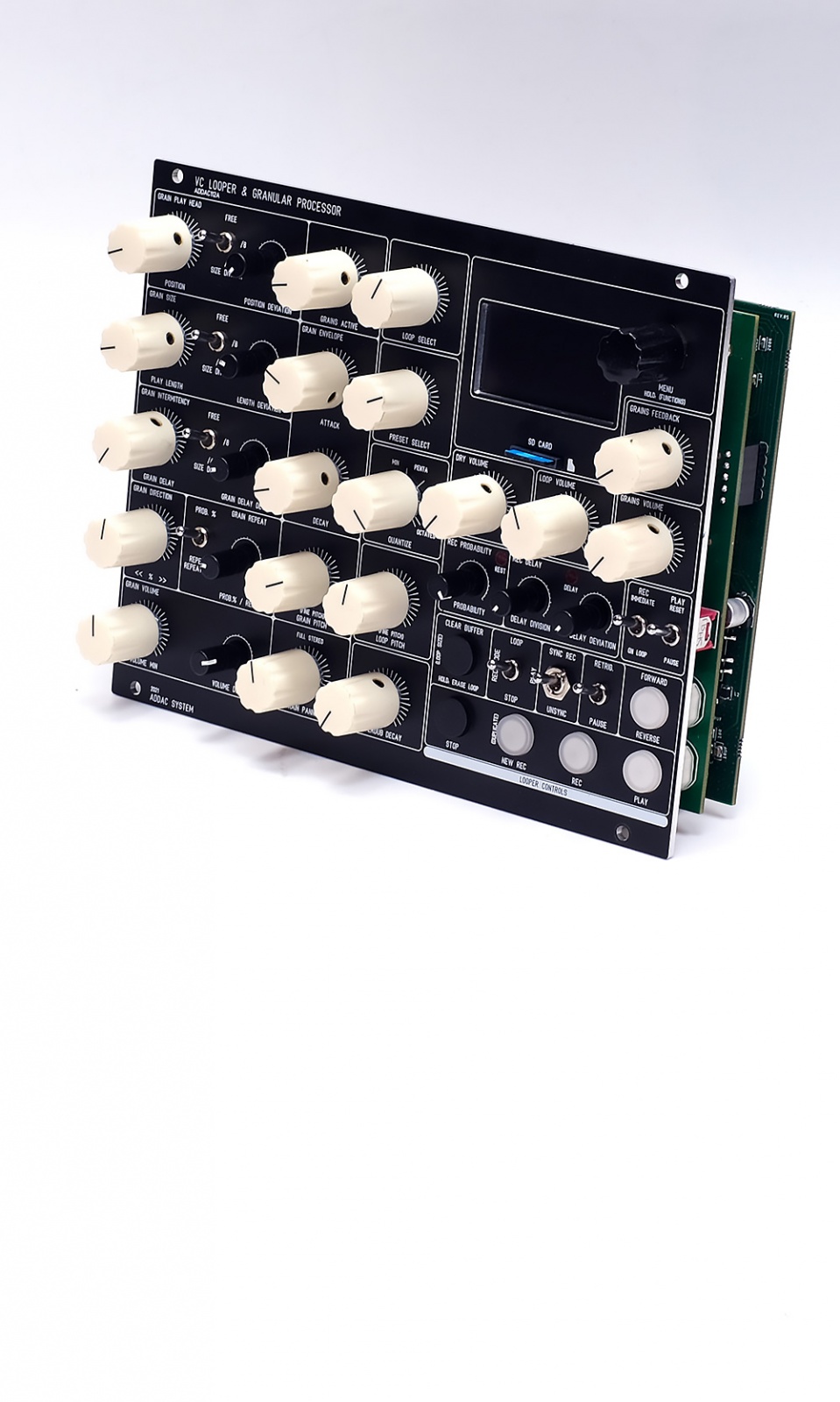 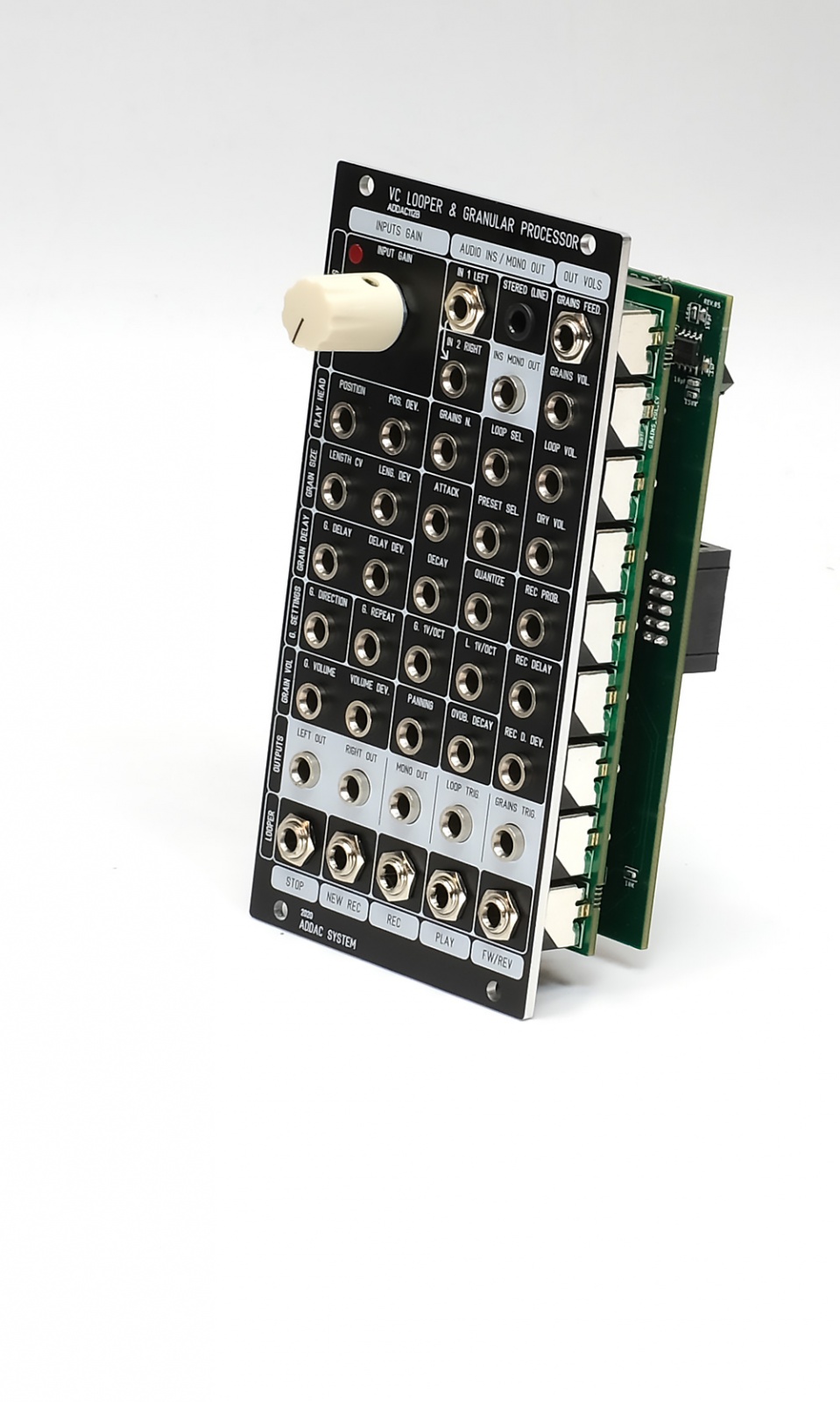 There’s a long history behind the granular concept and many reinterpretations of it’s core principles, this is our take on it.
In a loose description digital Granular refer to pieces of sound files being played at the same time with slight or completelly diferent parameters originating what is commonly refered to as granular clouds. Normally there’s a buffer size from which the granular engine snips it’s pieces from and plays them according to the parameters set. This buffer size is normally small in size where grains are so small that can reach the hearing spectrum and be heard as a sort of ever changing complex wavetable, this is the principle behind granular synthesis.
In our vision we added the possibility of long buffer sizes up to 5 minutes, allowing “softer” aproaches to the granular principle using it as an effect that can generate from “accidental” effects like slight “stutters” to extreme processing and transformation of any incoming audio signal.
This module is conceptually deep but easy to grasp and operate as all controls are in it’s dedicated panel, all jack inputs and outputs have it’s own separate panel to allow no compromise when playing it’s controls.

There are three main sections in this module:
Looper Engine: The Looper is where all the Real-Time recording happens. The audio input feeds the recording buffer, multiple controls allow to record and play loops into a list so that any sample in the list can be accessed at ay time and more acting as a standard looper
Granular Engine: The Granular acts upon the buffer of whatever LOOP is selected.
Output Mix The output mix allow individual control for the Dry Input, Looper Volume and Grains Volume.
Besides these main sections there’s also a  simple strip down MENU mainly used to LOAD and SAVE Banks, no Menu diving guaranteed.

For more detailed info we advise to read the User's Guide.

Hainbach dives into the 112

Here's a great introduction to the module by Monotrail Tech Talk

And one more great introduction from Omri Cohen

In case you're wondering: Sure! We can get you a custom coloured front panel for the ADDAC112.
It has an additional cost and takes 4 to 6 weeks to be ready.

A custom colour panel can be done in either Red, Green, Blue, White, Silver Gray, Yellowed Silver, and Dark or Light Bronze.

To update the firmware you need to detach the 112A from your frame but leave the ribbon power cable connected and the Power ON. Once lifted from the frame locate the Micro USB input between the two pcbs on the right side of the module.
Plug a cable to it and to your computer.

Make sure the USB cable is a proper standard USB cable, all around there's many Micro USB cables that are made just for powering devices: these will not work as they do not have the necessary transmission lines to communicate with the module.

2. Unzip the downloaded file and you'll have the Firmware file: "granular_V1.X.bin"

4 .Using the Chrome browser go here: (You will need an up-to-date version of Chrome, at least version 61 or newer)
https://electro-smith.github.io/Programmer

5. Press the “Connect” button and, from the options, choose the one called "DFU in FS Mode" (ignore platform and example drop menus)

7. Press ”Program” and it will show some progress bars on the browser

8. Once finished disconnect the USB cable and restart the module

Notice the new firmware revision on the startup screen.

Windows Troubleshooting:
There may be an issue on some windows computers that need a workaround before uploading firmwares as described in the user’s guide.

If you're experiencing issues where the "DFU in FS Mode" does not apper in the Connect menu then you’ll need to change the driver for the module, have a look here:

Just one detail, ignore their second step:
"Launch Zadig and put the Daisy into bootloader mode by holding the BOOT button down, and then pressing the RESET button."
Instead just enter the options menu on the module and choose "Upload firmware".

Black Screen Troubleshooting:
If the module does not power up after the firmware upgrade, or after power up please follow this procedure:
1. remove the 112A module from the frame and detach all ribbon cables
2. remove the 2 bottom screws
3. slowly and carefully detach both pcbs
4. grab just the bottom pcb and plug in the usb cable, do not plug the power ribbon cable
5. on the small yellow PCB where usb is plugged in, force DFU MODE by holding the BOOT button down and then pressing and releasing the RESET button
6. use the website to reupload the firmware
7. after the firmware process finishes, remove the usb cable
8. attach the pcbs back together, insert the 2 screws, ribbon cables and power it up.
After this all should be back to normal.

1.4.3 Beta: Besides some other minor issues resolved here's the release notes:

1.4.2 Beta: Besides some other minor issues resolved here's the release notes:

1.4.1 Beta: Besides some other minor issues resolved here's the release notes:

1.4 Beta: Besides some other minor issues resolved here's the release notes:

1.3.2: Besides some other minor issues resolved here's the release notes:

1.2: Besides some minor logic issues resolved there are some major implementations:

1.1.6 : Besides some minor logic issues resolved there are some major implementations: