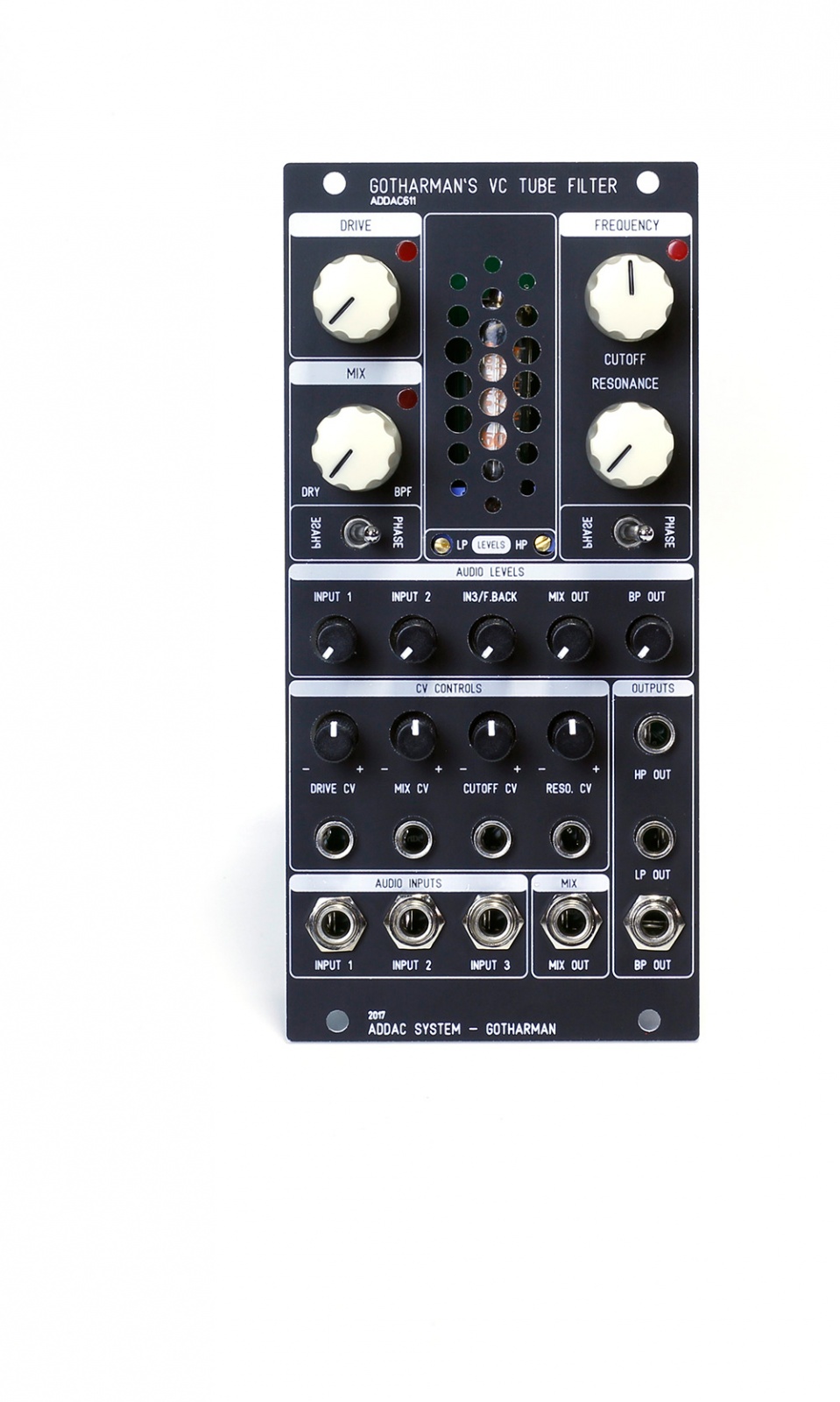 This module was developed upon the Tubaz Filter which was released in 2014 by Gotharman but is currently no longer in production. We loved the original module so much that we officially licensed it’s circuit and expanded it to feature several new functionalities.

Tubaz was not a “typical” filter, it’s like a poodle who believes he’s a German Shepard, while in reality it’s a big chested, short legged, character packed street Mut.

Here’s a paragraph from Gotharman regarding the original design:
“I designed it with the purpose of adding crunch, edge and distortion to my eurorack system. It is not an ideal bandpass filter, that cuts off all frequencies above and below the center frequency.
Because of its high drive, there are, in most cases, some bleedthrough of the harmonics, that should have been cut off. You might consider calling it a ”Band Add” filter. The main purpose of it, was to add edge, not to be a perfect bandpass filter.”

While everything he mentions is still true we believe he was being modest, It’s a dirty, gritty, growling and whining monster which promises you some of the most peculiar filter sounds you’ll ever hear.
However do not classify it as a “weird” distortion unit just yet because besides this hairy character it can be easily tamed (using lower volume levels) and then, with some care and intention from the user, it will transforrm itself showing it’s feline purrrrr and cuddle sweet and caring, or like any good mut, showing up at night all happy, wet and dirty from a full dog’s day and will lay down at your feet while wiggling it’s tail howling as yawning just happy to be back home.

As such, standard volume principles do not quite apply to these units, the Audio Levels will go up to x2 amplification, Drive will go up to x11 and master outs go up to x2. The combination of these will cover all diferent qualities it can present. Overall sound can be distorted pre-Tube (raising input levels), in Tube (raising drive) or post-Tube (raising Out levels).
Higher Inputs and Drive will always be gritty, lower Inputs and Drive volumes together with higher Output levels will make the overall behaviour more mellow and closer to what a typical filter would behave like.

No standard expectations should be considered when acquiring these units, all of the tubes were built in the 70’s and were bought from various sources, we always kept the premise that no tube was a bad tube (unless not really workinng) so due to each specific characteristics no module will sound exactly the same, making each unit particularly unique. This uniqueness will be particularly evident on their resonance/self-oscilating timbre as well as in their own microphonic qualities.

Regarding power and current draw, the module is designed using a low power tube, so it won't starve your eurorack power supply.

In case you're wondering: Sure! We can get you a custom coloured front panel for the ADDAC611.
It has an additional cost of 70€ and takes 4 to 6 weeks to be ready.

It can be done in either Red, Green, Blue, White, Silver Gray, Yellow, or Gold.